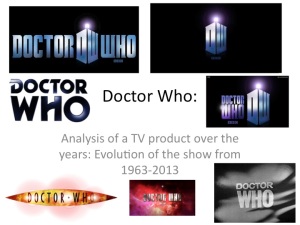 END_OF_DOCUMENT_TOKEN_TO_BE_REPLACED

Doctor Who: Analysis of a TV product over the years: Evolution of the show from 1963-2013

‘Doctor Who’ first aired on 23rd November 1963. Another version of it’s pilot episode (‘An Unearthly Child’) was shown the following week due to not many viewers watching it’s orignal transmission due to them watching the news about President Kennedy being assassinated. The ‘Doctor Who’ program itself was interrupted at one point to, and this was to broadcast yet more news coverage on the Kennedy assassination.