1960’s ‘Doctor Who’: ‘The Dalek Invasion of Earth’ Commentary & Narration

This is me explaining some of the key features, elements and references in the 1960’s ‘Doctor Who’ serial ‘The Dalek Invasion of Earth’. This is the second story in which The Daleks appeared on TV screens. I go into how certain aspects of it appeal to a certain audience, how humour is used, and how different characters are represented in different ways amongst other things including how popular culture references certain historical things in real life i.e. The Daleks in ‘Doctor Who’ and the Galactic Empire and the Stormtroopers in ‘Star Wars’ could be compared to Nazism. For Example, the Nazi party’s swastika has similarities to both the Galactic Empire’s logo in the ‘Star Wars’ movies but also the Sith Empire’s logo in ‘The Old Republic’.

Genres: How They Have Changed Over Time Powerpoint Presentation Slides 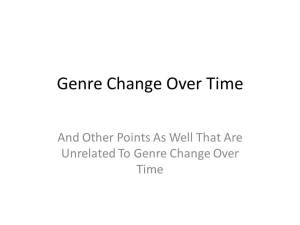 END_OF_DOCUMENT_TOKEN_TO_BE_REPLACED

In this first video from a Star Wars original movie (The Empire Strikes Back, 1980) there is no interactivity that an audience can interact with, all they can do is relate with the characters. Sorry for the bad quality but it’s the best version of the video I could find on You Tube without extra clips or music added in. It is the original music from the film.

How science-fiction has changed over the years

Firstly, ‘Doctor Who’ is massively different nowadays to how it was back in the 1960’s. When the show started The Doctor was played by an old man (William Hartnell) and nowadays he is played by a young man (Matt Smith). His companions back then were his granddaughter (Susan Foreman) and two school teachers (Ian Chesterton and Barbara Wright), but nowadays it is a woman who keeps dying every time he meets her (Clara Oswin Oswald), so the program has become more complicated over the years with complex story arcs. In the 50th anniversary it is rumoured that there will even be a secret story arc that has been building up over the last three years, maybe more. In the 60’s there weren’t hardly any story arcs.